Are you all recovering from your food comas and your midnight shopping sprees? I sure hope so. Because you know what follows all of that? DISAPPOINTMENT…here at Silver Screen Serenade, anyway. That’s right–I’m here to bring you yet another disappointing NOOOOvember film, this time from my new friend Dell from over at Dell on Movies. Have you guys been over to see Dell? He’s got some fantastic content, but one particular stroke of genius that has been taking the blogging world by storm is his Iconic Female Movie Characters blogathon. It was a brilliant idea, and a bunch of people have been having fun with it–including me (see here)! Anyway, Dell’s here to vent, so let’s give him the floor…page…whatever. Dell?

Caragale at Silver Screen Serenade, who helped run the O Canada Blogathon, I took part in last month, is back with a blogathon of her very own. This one is the NOOOOvember 2014 Blogathon. The object of this is for us bloggers to vent about movies we had high expectations for, but were let down. Hard.

Man, do I have lots of those.

The one I’m going with for this exercise is a movie I watched just recently after I knew that most of you were gushing over it, proclaiming it a triumphant return for a certain iconic movie creature. Let’s see, there were the critics lauding it with a 78% score on rottentomatoes.com and an average score of 73/100 on metacritic. Then there was you, the audience. You blessed it with a global take of $525 million at the box office. Cool. Memories of 1998’s fiasco seemed to be erased. I gladly sat down to take in the new and improved Godzilla.

Back in 1999, we meet Joe Brody (Bryan Cranston) and his wife Sandra (Juliette Binoche). They are both scientist working in Japan at a place where lots of sciency stuff happens. It comes to Joe’s attention that some sort of seismic event is taking place. Whatever it is, it’s highly radioactive and destroys their place of employment, killing Sandra in the process. Fast-forward to the present. Joe is still in Japan, frantically trying to figure out what happened all those years ago. Meanwhile, his little boy Ford (Aaron Taylor-Johnson) is now all grown up, in the military, and has a family of his own. He also wants nothing to do with Dad, whom he thinks has gone cuckoo for Coco Puffs. More seismic, radioactive stuff. If we hadn’t guessed, we find out for sure that it something to do with a gigantic monster going all bull in a china shop with man-made structures all around the globe. No, not the one in the title. This is the bad monster. Eventually, Godzilla shows up to be the good monster. Not nearly enough stuff ensues over two hours of my life that I demand be returned to me.

Wait, what? I didn’t like yet another American attempt at the most iconic monster in movie history? I mean, there’s the possible exception of King Kong, but you get the point. And I consider myself blessed to be an American, so don’t even go there with me. Why did I not love this? To steal from the great Elizabeth Barrett Browning, let me count the ways.

My biggest gripe is that I actually want some Godzilla in my Godzilla movies. It’s nearly an hour before the big guy (or gal, ask Matthew Broderick) shows up. Granted, when he does he gets one of those great slow-motion, from the bottom up reveals that shows off the magnificence of this particular piece of cgi. We get roughly half-a-dozen repeats of this over the next forty minutes. Thankfully, there are some variations in the angles of these shots, but they’re still just more slow-motion looks at the titular monster doing nothing. Sadly, that’s all we get. This means that for almost two hours, the monster portion of the movie consists of quick scenes of the bad monster moving from place to place every twenty minutes or so (didn’t actually time it, just guessing) and shots of surface water moving along as Godzilla presumably travels beneath it. Eventually, a second bad monster shows up. I won’t spoil what happens with that, in case you somehow don’t trust my word over everyone else’s and see this anyway. It’s okay, really. Just know that I rolled my eyes as hard as possible and felt like it was 1998 all over again. 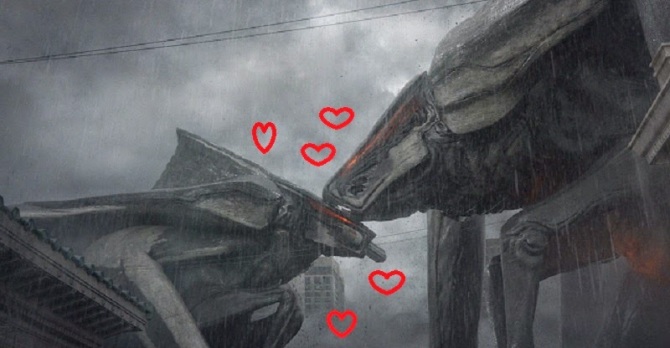 You know what the most frustrating part of this whole experience was? There are several occasions where things are finally about to pop off only for the alleged film-makers to pull the rug out from under us. A few times, Godzilla actually engages the other monsters for some rough and tumble only for the camera to cut away just as they start getting down to business. One time, we’re stuck with the point-of-view of our human characters who scurry inside and shut the door. No windows. Yup, I can plainly see Godzilla and one of the bad monsters commence to whipping each other’s asses only to then see a door shutting in my face. And I can’t push the damn thing open. Really? WTF!

Speaking of humans, and I consider myself blessed to be human so don’t go there with me, let’s talk about them. They are the other reason why this is a rotten movie. for some strange reason, a bunch of people got together and decided they weren’t going to make a dumb action flick where monsters fight and smash things all the time. Of course, the problem is that’s EXACTLY what they should have made. Instead, we try to turn a “movie” featuring giant monsters into a compelling “film” about human relationships. Yeah, well, it sucks at that. We mostly pal around with Aaron Taylor-Johnson, our blank slate of a lead actor. At first, he and dad sneak around trying to figure out what’s going on. These scenes are at least somewhat fun because the always fun Bryan Cranston carries them. He brings much needed depth and even zaniness to the proceedings. Unfortunately he soon, and predictably, disappears from the action.

Similarly misused are two other great actors: Ken Watanabe and Elizabeth Olsen. Watanabe pops up from time to time to give us history on Godzilla and other exposition in a grim and foreboding manner. This history includes telling us that Godzilla is a super-predator. Doesn’t that imply that Godzilla wants to eat the other monsters? Anyhoo, let’s move on and talk about Elizabeth Olsen. Poor girl. I think someone forgot she was even in the movie. She vanishes for long stretches then shows up and looks scared for a minute before disappearing again. If you want to see her effectively looking scared, watch Silent House. Better yet, watch Martha Marcy May Marlene. 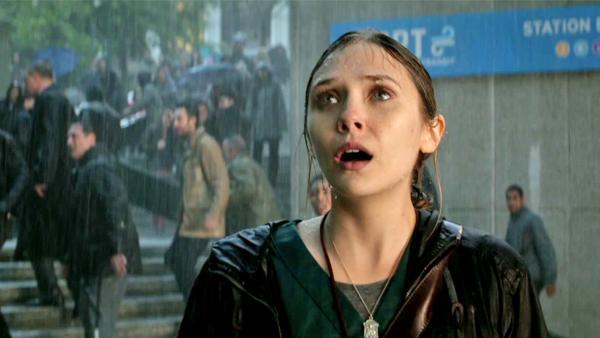 Later, we’re just hanging with our wannabe hero as he tries to inject himself into the situation whenever possible. In case my description of him as a blank slate wasn’t clear, he’s about as interesting as, well, nothing. Seriously, he makes the comatose appear charismatic. His acting is nearly as bad. I literally spent much of the movie wondering who he had to blow to get this gig. Maybe I’m being too harsh. I actually liked him as the hero in Kick-Ass, but dammit I’m hot about this. It’s not entirely his fault, though. Hollywood constantly mis-focuses its movies. The ones that should be smart, character studies are often turned into stupid actioners while those that should be flat out, balls-to-the-wall, mindless fun are handled like Shakespeare. Pacific Rim, anyone? Yeah, same issues. As if proving my point, we even get several instances of Godzilla being nice to our hero by going around him on the way to combat. By this time I was really hoping someone would poke my eyes out, but I persevered.

Eventually, we get a monster fight. Honestly, by this time it was far too late to save this duck from drowning. I was already pissed at every single person involved in bringing this abomination to the screen. Well, except for Bryan Cranston since he was the only enjoyable thing up to this point. Still, when I finally got to see Godzilla wailing on the other monsters, I perked up a bit. Then, I sank right back into my seat because, like a lot of the movie, it was too damn dark to see anything. I could barely make out what was going on. It sounded great, but as for what I was watching I can’t be entirely sure. Even the cheesiest Godzilla flicks back in the day had the wisdom to include lots of humans shining spotlights on our combatants during night scenes. Here, we get a movie with a gazillion dollar budget, of which not one thin dime went to someone who though it might be a good idea for us to actually see the one part of the movie we came for. And then, as if the powers that be had been saving it for some grand finale, Godzilla breathes fire. No, wait. GODZILLA BREATHES FIRE! That’s the way they want you to think of it. It’s obvious they think the rest of the movie was some highly compelling and dramatic build up to this moment. No. That would require people who had a clue how to handle this material to be involved. Clearly, this isn’t the case. The gist of this last paragraph is that I had to wait two f’n hours to see Godzilla do the thing for which he’s most known. That, in a nutshell, is why this movie sucks.

An excellent choice, Dell! Godzilla seems to be a popular one to vent about, huh? I did (see here) and so did Zoë (see here)! I think that’s kind of telling, no?

Anyway, tomorrow is, sadly, the last day for NOOOOvember posts! I’ll have one more guest popping by, then we shall bid adieu to this series for another year…and turn our sights toward another series. I’m going to try to post about that next week, actually. Do you guys remember Resolutions? Because it will be making a triumphant return in January. Details to come! 🙂