It’s Friday once again! Huzzah! And I’ve got a brand-spankin’ new pair of films to talk about. The target audiences for these are way different from each other, but they kind of touch on some of the same themes, I guess (albeit very, very loosely), and they’re both actually pretty good for what they are. But we’ll get into that. Let’s sing a little Duet, shall we? 🙂 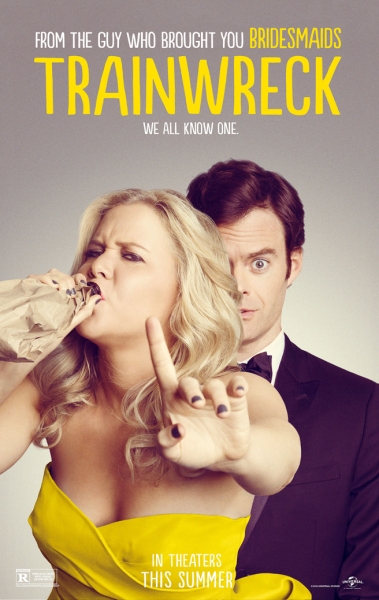 Synopsis: “Having thought that monogamy was never possible, a commitment-phobic career woman may have to face her fears when she meets a good guy.” –www.imdb.com

The Staccato Version: I feel like director Judd Apatow and writer/lead actress Schumer are a wonderful team, and I’m kind of hoping this isn’t their only collaboration. I think they could do some really fantastic things in the future, and I think Trainwreck is a solid start. Schumer and Hader make a likable pair, the supporting cast is a delight, and there are definitely laughs to be had for all. It doesn’t quite trump Spy as my comedy of the summer, but it’s still worth a movie ticket.

Synopsis: “A young man and his friends embark upon the road trip of their lives to find the missing girl next door.” –www.imdb.com

The Staccato Version: I realize that these teen-centric movies aren’t going to be for everyone, but I found Paper Towns to be a fair amount of fun—significantly less heavy than its Green-affiliated predecessor, The Fault in Our Stars. That said, if you like TFiOS, I think it’s safe to say you’ll like this, too. And you’ll DEFINITELY enjoy a certain cameo in the film…but you’ll just have to see it to find out what I’m referring to. 😉

That’s all for now, folks! Before I sign off, I just wanted to give you a little heads up: Silver Screen Serenade is shutting down for a bit. Not long, I promise—probably not more than a week or two. I just need a break. And I need time to catch up on my blog reading, which I have had literally no time for. I’ll probably post a quick note on Monday to remind everyone of my absence. Could you do me a favor? Could you pay SSS a visit every now and then? Lol. I hate thinking of how the old gal’s stats are gonna plummet while I’m away. Maybe I’ll freshen her up with a redesign or something…We’ll see. Anyway, have a good weekend, kiddos!