Happy Hump Day and let the guest posts BEGINNNNN!!! My Blogiversary Bash is officially underway, and I’m thrilled to present the first of several too-cool-for-school guest bloggers who will be popping up on here to celebrate their favorite movies however they see fit. Are you as excited as I am?! I hope so!! We’re starting things off today with the wonderful Miss Bethany of Coolsville, a site with films reviews from pretty much every decade and some great book and music posts to boot. Bethany has a lovely site, so be sure to go pay her a visit if you haven’t already! Anyway, Bethany is here to talk about one of her favorite movies with a top 5 list. I do love a good top list. 🙂 Let’s see what she has to say… 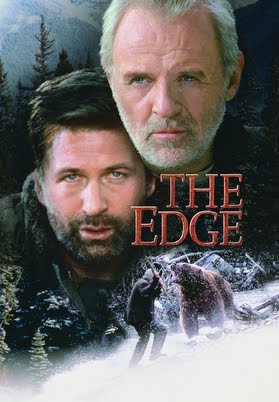 The Edge is a dramatic thriller from the late 90s starring Alec Baldwin and Sir Anthony Hopkins and directed by Lee Tamahori. I discovered the movie on cable as a teenager, and for awhile it seemed like most networks carried the flick on their schedule on a regular basis! To this day I declare The Edge one of the great cable staples. Others might praise the film for kickstarting the ‘Charles drinking game’ (more on that later).

The plot: Charles (Hopkins) is a publishing billionaire married to a gorgeous young model named Mickey (Elle Macpherson), and he has a penchant for outdoor knowledge. The couple arrives in Alaska for a vacation/photo shoot with Mickey’s arrogant but handsome photographer Bob (Baldwin) and her small entourage. Jealousy is hinted between Bob and Charles over Mickey and the two men intuitively decide a friendship is out of the question. Mickey encourages the dormant Charles to get some fresh air by taking a short plane trip with Bob to meet a local native. The plane crashes, and the two must band together and try to survive in the dangerous wilderness.

Now here are 5 reasons why I like this movie:

5) The Plane Crash Scene
The Edge’s plane crash scene occurs in the first twenty-five minutes and sets the course for the rest of the movie. The heartstopping sequence is quickly executed and lives up to the film’s title. It’s very tense! One of the characters drops some major foreshadowing shortly after The Edge begins; it appears the writer wasted no time getting the word out that flocks of geese were prone to flying into aircraft windshields in the area. Sounds funny until it actually happens! As the plane hits a remote Alaskan lake we are treated to a claustrophobic glimpse of its aftermath as three survivors swim to safety, that is if you find isolated forests safe…

4) The Actors Who Look Like Jack Palance and Chris Rock
Maybe it’s just me, but two of the actors in the supporting cast look familiar. The mysterious Alaskan lodger named Styles is not Jack Palance but L.Q. Jones, a veteran character actor know for working in westerns and standing as one of Hollywood’s go-to mysterious creeps, and I mean that in the nicest way! The Edge’s lone African American, Stephen, is played by Harold Perrineau, though at the proper angle you’d swear he was comedian Chris Rock. Jones and Perrineau are crucial to the plot and hold their own next to the movie’s main stars.

3) Survival Tips, Superstitions, Oh My!
Did you know you can make a compass by rubbing a paperclip on silk and placing it on a floating leaf, and you can create a fishing line using string and a shiny piece of jewelry chain? Are you aware that if you’re presented with a knife you should return a coin to the giver, for not doing so would cut the friendship? Have you ever wondered why people die in the woods? Answer: they die of shame! Is any of this true? I’m no survivalist, so I’ll take (screenwriter) David Mamet’s word for it.

2) The Bear!
Throughout The Edge, Charles and company have to endure the wrath of the forest’s resident bear. The giant animal is a ferocious and vicious wildlife habitant, but behind the scenes the bear was a cuddly and well-trained showbiz animal named Bart. Aww. Bart the Bear was described as “docile” and “friendly” by his human co-stars; Anthony worked with Bart before in Legends of the Fall (1994) and described him as “an incredible creature.” Bart had a successful career in TV and film, making appearances in The Bear, Homeward Bound: The Incredible Journey, and The Life and Times of Grizzly Adams. Following the release of The Edge, Bart presented at the Academy Awards with Mike Myers! In 2000, Bart succumbed to cancer at the age of 23. 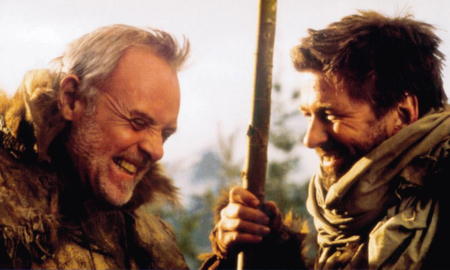 1) The Teaming of Anthony Hopkins and Alec Baldwin
Alec and Anthony may play up a rivalry on screen – after all, the two characters were fighting for Elle Macpherson’s affections – but it’s easy to detect the lauded actors are supportive friends off screen. Hopkins had only nice things to say about his co-star when they worked together and credits Baldwin for convincing him to seek medical attention when he hurt his back during filming. They later reunited in Shortcut to Happiness (2007). Here’s hoping they will work together again!

The Edge suffers from the usual tropes and is way predictable, but when I pair it with a bowl of pasta, I don’t care anymore! Others may like to partake in alcohol instead ever since someone decided a drinking game should exist for every time the name Charles is uttered. Apparently this movie is a minor hit among college kids and social film buffs who want to get plastered. No matter, The Edge is a fun ride. I love when Charles and Bob make the effort to work together but it’s also interesting to watch when they turn against one another. And we need more cool actors in movies fighting bears. As long as no one is harmed, bear versus actor equals entertainment.

Want to learn more about The Edge?
Check out this 5-minute featurette (trailer included):