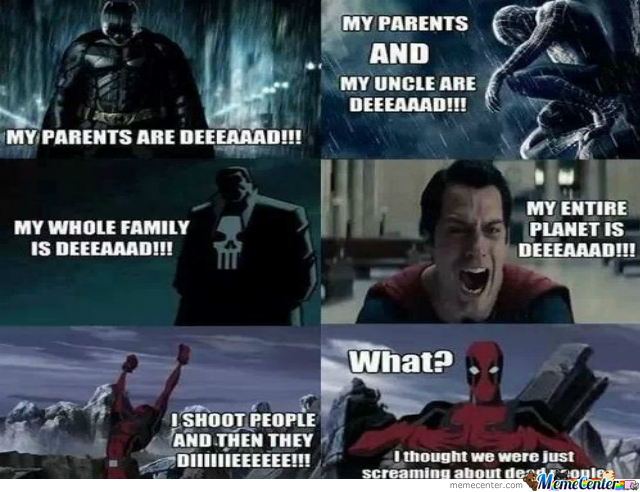 This is why the Deadpool movie could very well end up on this list one day.

Welcome back! Have you been on pins and needles waiting to read the rest of the Top 20 Superhero Movies List that I started yesterday (see here)? …Well, gees, even if you haven’t been you can at least nod and pretend you’ve been that eager to see it. Are you nodding now? Thank you. This is why I love you. Anyway, let’s get to the rest of that list. 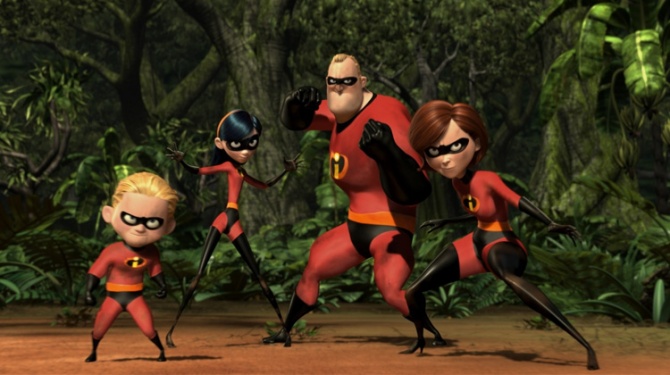 The Power of Pixar

I haven’t talked about this movie much on my blog, but The Incredibles really is a fantastic film—and, I might add, one of only two films on this list that can’t be traced back to Marvel or DC Comics. Well, comic books certainly inspired the film, but it’s still an original Disney/Pixar creation. While most of the films are here are for a slightly older audience, The Incredibles is an animated, family-friendly affair that is even about a family, albeit a super-powered one. It’s exciting, humorous, and heartfelt, which is much more than a lot of superhero offerings nowadays. Plus, that moment toward the end with baby Jack Jack is pure brilliance.

The Winter Soldier does NOT want to play frisbee today.

I have a huge degree of respect for Captain America: The Winter Soldier for a number of reasons, but mainly because of this: It completely changed the Marvel Universe. I guess it’s easy to make a case for The Avengers being the film with the greatest impact, since it brought so many superheroes together for the first time, but—and spoilers if you haven’t seen this film—The Winter Soldier completely tore apart S.H.I.E.L.D., the organization behind basically every Marvel movie. It was a shock for Cap and every other loyal S.H.I.E.L.D. agent to discover that Hydra had infiltrated their organization, and the good guys are still trying to recover from it. This film is stylish, smart, action-packed, and as much a thriller or spy film as it is a superhero one. In short, it’s awesome. One of Marvel’s strongest films to date.

Between Captain America: The Winter Soldier and Guardians of the Galaxy, 2014 was a rock-solid year for Marvel Studios. Guardians has received a ton of praise, and for good reason. It’s so much fun that it’s almost ridiculous. An excellent cast of quirky characters, impressive visuals, a great story—Guardians is enjoyable on a lot of levels. Oh, and that soundtrack! One of the best movie soundtracks ever, in this girl’s humble opinion. The best part about it is that it’s not just an awesome superhero movie, but an epic sci-fi adventure, too. Maybe it’s a bit of a stretch to call it Star Wars for a new generation, but, hey, if the shoe fits… 🙂

Batman: A level of cool none of us could ever hope to achieve

Yep. It’s time to discuss the first film in the Dark Knight Trilogy. When Christopher Nolan rebooted Batman 10 years ago (Gees has it really been 10 years?!), I think everyone was shocked by how different it was from any of the previous Batman films. So dark. So serious. But also, so freaking good. I realize for some people, the world Burton created will always be their version of the Batman story. But for me (and almost anyone of my generation), this is what Batman is supposed to be. Christian Bale may have received some criticism for his raspy-voiced Batman, but I think he’s great in the role. Also, Cillian Murphy as Dr. Jonathan Crane/Scarecrow. Also, Morgan Freeman as Lucius Fox. And Liam Neeson as Ra’s al Ghul. And Gary Oldman as Commissioner Gordon. And Michael freaking Caine as Alfred. Casting perfection. An epic start to an epic trilogy.

Batman and Bane–not exactly the best of friends…

Brace yourself—back-to-back Batman movies! Some of you may be surprised to see that I’ve listed this above Batman Begins, especially since I included it in this list of some of my film disappointments. Here’s the thing: While The Dark Knight Rises is a bit of a disappointment after the incredible Dark Knight, I think it’s still an excellent film and a worthy end to the trilogy. And, yes, I also think it’s a tiny bit better than Batman Begins. There are a few reasons for that. 1) There’s so much more at stake in this movie. 2) DKR gives us a tough lady hero in the form of Anne Hathaway’s Catwoman. 3) Tom Hardy’s Bane is scary as all get-out. Oh, and Joseph Gordon-Levitt! I love that he’s helping on the sidelines—a sort of Robin without a costume. DKR isn’t the perfect ending, perhaps, but it’s still pretty darn good.

I have an abundance of love for this movie. Not only does X-Men: Days of Future Past bring the original X-Men cast and the newbies from First Class together in a delightfully fun, time-bending adventure, but it also does something even more important for the franchise: It corrects all the horrendous mistakes of X-Men: The Last Stand. For this, I feel we are all in this film’s debt. This film has me all kinds of excited for future X-Men films—especially if it means we get to see Evan Peters’ Quicksilver again. Seriously, his shining moment in Days of Future Past is one of the best superhero moments ever (and I talk about that a little here). I guess what I’m trying to say is bring on X-Men: Apocalypse! 😀

He looks scary, but he is actually the sweetest.

Not gonna lie, Days of Future Past almost edged this one out. But X2: X-Men United is too freaking good. After laying the groundwork for a solid franchise with the first X-Men film, director Bryan Singer returns to show us everything a good sequel should do. X2 shows us more of the characters we learned to love in the first film plus a handful of awesome newbies. And by “awesome newbies” I mainly mean Alan Cumming’s Nightcrawler. Such a great, interesting character. And can we talk about Magneto’s breakout scene? Because yaaaaassss. So much is so good about this film. It’s on a grander scale than its predecessor, and every bit of it is exciting and clever. Love it.

Iron Man has the coolest toys.

And so began Marvel’s takeover of the world. After co-producing a slew films, Iron Man was Marvel Studios’ first solo production, and what a start it was. Robert Downey Jr.’s too-cool-for-school portrayal of billionaire genius playboy Tony Stark is utter perfection. He gives the character mile-a-minute smarts and a healthy degree of sass, yet he’s ultimately a very likable and even vulnerable character. Tony’s story has an edgy, even tragic start when he’s captured by terrorists, giving it a grittier, more modern tone than many preceding superhero films. But any of the darker stuff is balanced out by plenty of humor and action, tied together with a fantastic script. For my money, Iron Man is Marvel’s best solo hero film.

Good lord. Where to start? Well, first of all, if you’d like to see me gush about this film like the nerd that I am, just check out this post. Once you’ve done that, let’s see if we can break down this film’s awesomeness with words instead of an explosion of clips and pics. The Avengers is one of those films that has no right to work, and yet it just…works. A handful of Marvel heroes come together to save the world from Loki’s mischief, and it is action-packed, hilarious, clever, and, ultimately, perfect. It has more memorable moments and quips than you can shake a stick at, and director Joss Whedon gives every character his or her moment to shine. I mean, who knew we’d all come out of the theater caring so damn much about Clark Gregg’s Agent Coulson? For me, this film remains the one to beat for Marvel.

This was taken right before Batman braided The Joker’s hair…Just kidding. Although I’m sure that’s in someone’s fanfiction.

How many of you predicted that this would be my number one? Everyone? Probably everyone. But whatever. The Dark Knight is not only widely proclaimed the best superhero film to date, but it seems to have earned the honor of modern masterpiece, too, absolutely obliterating the mold of popcorn fluff entertainment that has trapped so many other superhero films. It’s a complex, gripping story of a man’s mission to save his city from one of cinema’s greatest psychopaths: Heath’s Ledger’s Joker. Ledger’s thoroughly disturbing yet absolutely delightful performance rightfully earned him a posthumous Oscar. Every time I see him in the role, I get chills. The film as a whole is brilliant with stellar performances across the board, a smart script, plenty of exciting action sequences, and an unforgettable story. It’s the best of the best, y’all.

So there you have it! My top 20 superhero films. Gees, with more and more superheroes coming out of the woodwork and franchises continuing to expand, who knows how much this list could change over the next few years? Still, it’s going to take a lot to knock The Dark Knight from its number one spot. Anyway, just because I like having things all together on one page, I’m going to list the full top 20 below. But how about you guys? Does this list match up with yours? Any that you would add or subtract? Any future films that you think will end up on your top list? As always, I’m happy to discuss these nerdy things with you. 🙂

#8: Guardians of the Galaxy