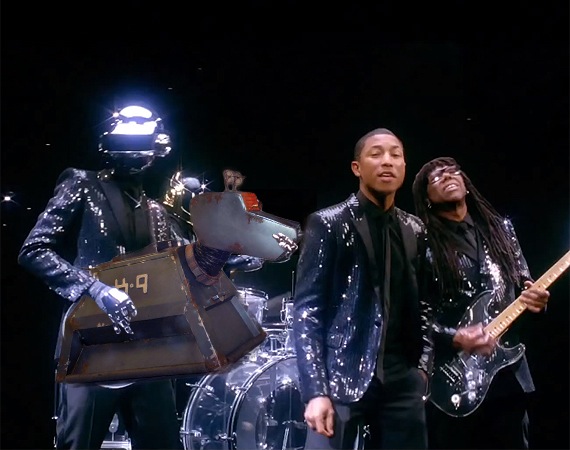 K-9 as guitar…for Daft Punk. This is called winning.

Hey there, guys! Been awhile since I had this feature around, huh? For the uninitiated, this is a little something I like to call Song and Screen. Normally, it’s when I pick out songs used in movies in such a memorable way that I can no longer think of the song without automatically thinking of the movie. Today, however, I’m switching things up and turning my attention to television. There are certain TV episodes that stand out in my mind largely because of epic musical moments. Here are just a few examples.

Sweet God in heaven, I love Sherlock. Benedict Cumberbatch and Martin Freeman are, of course, a huge part of what makes the show so magnificent, but Andrew Scott’s Moriarty was an utterly delightful surprise at the end of the first season. And when this moment brought a resolution to that tense ending, I loved him even more. Because Moriarty’s ringtone is The Bee Gees’ “Stayin’ Alive,” and that is so random that it’s perfect. The clip above is the one I always think of–the dramatic, game-changing confrontation at the end of season two. Frankly, I don’t think The Bee Gees have been this cool since the ’70s.

When I first started watching Modern Family, I borrowed season one from a friend. I remember really enjoying the whole season and having lots of laughs, but this…this musical moment was the icing on the cake. Mitchell (Jesse Tyler Ferguson), who is deathly afraid of birds, finds his house invaded by a very bold pigeon. Panicked, he calls his partner, Cameron (Eric Stonestreet), who is about to sing at a wedding. Cameron has to hang up before he has a chance to tell Mitchell what to do, so Mitchell decides to just man up and attack. The following scene, which cuts between Mitchell’s bird battle and Cameron singing Franz Schubert’s “Ave Maria,” made me laugh an embarrassingly long time. If I ever hear “Ave Maria” at a wedding again, I might lose it.

Oh, Supernatural. You do give me giggles. Honestly, Dean’s (Jensen Ackles) obsession with classic rock music could give me the opportunity to use about a million songs on here, but I’m going to stick with the song use I know and love best: the use of Survivor’s “Eye of the Tiger.” The handy clip above shows both the actual scene from the show and the “extended cut,” if you will. Both moments are great, but, man, that extended cut…There’s just something magical about a man that dedicated to lip-syncing Survivor. I literally cannot separate “Eye of the Tiger” from Ackles using his leg to air guitar, and I am completely okay with that. Seriously, whether you’re a fan of the show or not, watch the clip. Also, feel free to watch Dean screaming here.

Lost is a show that I really need to try to review on here at some point. I don’t want to be dramatic and say it was one of those shows that made me who I am or anything, but it definitely fed my love of television and could easily be one of the factors that led to this blog. It was one of my first big TV obsessions, and questionable ending or no, I will always look back on it fondly. And I’m sure my fellow Losties remember Hurley’s (Jorge Garcia) CD player fondly. It kind of became a character in and of itself. This is one of the CD player moments I remember clearest: after an episode with all the usual craziness and island tension, Hurley puts on his headphones and jams to Joe Purdy’s “Wash Away.” For a moment, all is peaceful. Of course, that peace doesn’t stick…but it’s one of those really cool moments where it seems like being stranded on a mysterious island with a bunch of strangers wouldn’t be so bad.

Admittedly, I always watched (and still watch) How I Met Your Mother pretty sporadically, but the episode where Marshall (Jason Segel) says goodbye to his car is easily one of the most memorable ones to me. You see, Marshall’s car has a tape jammed into the player that plays The Proclaimers’ “I’m Gonna Be (500 Miles)” on an endless loop. Every time the car is shown, we hear to song. If you’re not a Proclaimers’ fan, the episode is probably a nightmare, but from the perspective of someone who loves the song, it’s a lot of fun. The range of enthusiasm that Marshall and Ted (Josh Radnor) go through while listening to the song over and over again is simply hilarious.

Have I gotten these songs stuck in your head now? Or have I just made you want to go watch TV? 😉 By the by–this features is actually something I opened up to guests a long time ago, and I have three lovely guest write-ups here, here, and here. If you have some memorable uses of songs that you’d like to discuss, just let me know by commenting below and/or sending me an email (caragale123@gmail.com), and we’ll see about getting you on here, too! It’s a pretty casual thing, so just let me know whenever. Anyway, come back tomorrow to read the very last guest review for Resolutions! 🙂