I know I just did one of these a little less than two weeks ago (see that geektastic post here), but GAWD there’s been so much more nerdy news since then! I’ve been dying to talk about so many things with my fellow movie/TV buffs, and I couldn’t wait any longer to do it. So put on your Batman cowl, your Spock ears, your one ring to rule them all, or whatever else you need to get in the spirit…because it’s time to geek.

Exhibit A: The cast of the Suicide Squad

Exciting casting news has been dropping all over the place lately, but this…this is pretty awesome. When I first heard about the cast of DC’s upcoming Suicide Squad movie, I tweeted something that I feel sums up my feelings pretty perfectly: “That moment when you’re more excited about a villain movie than a superhero one…” Seriously, I am looking forward to this way more than Batman v. Superman: Dawn of Justice not only because of the star-studded cast, but because of the villains!

Let’s break this down: 1) Cara (nice name!) Delevinge is Enchantress. I don’t know much about the actress or the character, but Enchantress seems pretty badass, so I’m on board. 2) Jai Courtney is Boomerang. I’ve seen Courtney play a tough guy in a few things, and I like him well enough, but I really like that a native Australian is playing Boomerang, whom I believe is normally portrayed with an Aussie accent. 3) Tom Hardy is Rick Flag. It’s going to be a little weird seeing Hardy back in the DC world as a totally different character, but I think he’s a great choice for the leader of this ragtag group of villains seeking redemption. 4) Will Smith is Deadshot. I know I little bit about Deadshot from Arrow  and the Arkham video games, so I’m very interested in seeing the lethal marksman infused with Smith’s sass. 5) Margot Robbie is Harley Quinn. Again, I know very little about Robbie (I still haven’t seen The Wolf of Wall Street), but I love that Harley Quinn is finally making her way to the big screen because she’s one of my favorite Batman villains. 6) Jared Leto is The Joker. After Heath Ledger’s perfect portrayal of everyone’s favorite Batman villain in The Dark Knight, I expected to be a little more nervous about someone else taking up the role, but I’m intrigued by the casting of Leto, who I think could be really, really good.

Anyway, with a summer 2016 premiere date, we’ll have to wait awhile for the verdict on this one, but DC has gotten my hopes up.

Exhibit B: That Star Wars teaser

Okay, so I’m the last one on the internet to talk about this, but…how ’bout that Star Wars teaser, eh?? I’m not ashamed to admit that I get goosebumps every time I hear that music at the end. Also, stormtroopers! Soccer ball droid! Crossguard lightsaber! And, most importantly, MILLENNIUM FALCON!!! I had hoped to see some familiar faces in the trailer, but, hey, it’s called a teaser for a reason, right? Anyway, I didn’t want to just leave you with something you’ve seen a million times, so click here to see a glorious spoof of the trailer from the (sometimes) funny folks of Saturday Night Live.

This has been a rumor for months now, and I am so, SO excited that it has finally been confirmed. Honestly, I know basically nothing about Doctor Strange, but many of you who know me even a little are aware of my obsession with Bennybatch, and the idea of him joining the Marvel world is enough to make this fangirl giddy. Also, I’ve heard whispers that Doctor Strange might play a pivotal role in bringing together the Avengers and the Guardians of the Galaxy. Though I look forward to that giant Marvel mash-up with all of my heart, I can’t help wondering if the world can handle that much awesome…

Exhibit D: The cast/title of Bond 24

As you may have learned from this post, I’m quite a fan of the Daniel Craig Bond films (and I’m even a new fan of one of the Sean Connery films thanks to MovieRob), so I’ve been eagerly awaiting news of Bond’s next adventure for awhile now. Last week, news finally arrived. The upcoming film will be called “SPECTRE,” and while the usual suspects will be returning to be awesome in their respective roles (Craig as Bond, Naomie Harris as Moneypenny, Ben Whishaw as Q, Ralph Fiennes as M, etc.), there are a few new names on the list that have me excited. Like Lea Seydoux (I haven’t seen her in much, but I think she could be great here). And Dave Bautista (who deserves more time to shine after an excellent turn in Guardians of the Galaxy). And Christoph Waltz (who is great at basically everything). But, most importantly, ANDREW SCOTT, who has had my admiration from the very first moment I saw him as Moriarty on Sherlock. The best part about all this? SPECTRE comes out NEXT YEAR. As far as movies go, 2015 is basically going to win.

Exhibit E: Ryan Reynolds is clearly ready to be Deadpool

I don’t know what exactly inspired me to find out so much about Deadpool, but I’ve learned enough about this character that I really, really like him and would love to see him in a movie that doesn’t completely screw him up (I’m lookin’ at you, X-Men Origins: Wolverine). Because he is hilarious, and he deserves another chance. The only problem is that Deadpool is so damn bizarre. Basically, he’s a hyperactive man-child with the skills of an assassin who has a habit of breaking the fourth wall. On paper, it somehow works, but I worry about how that might translate to the big screen. We’ll see. Either way, I’m happy to see Reynolds take another crack at him, and I shall be awaiting more news with geeky anticipation. Also, I had no idea that test footage for this film had leaked!

I couldn’t find a great Teen Titan pic, but for Christmastime, this seemed fitting.

Though DC may be a couple steps behind Marvel in the movie world, I am thrilled to see them thriving on TV with Arrow, The Flash, and Gotham (I would include Constantine, but, unfortunately, it sounds like it might be getting the boot). Now, they’ll be adding one more show to the mix with Teen Titans, and I am intrigued. What I know about the Titans in sketchy at best, but I think that Robin is usually involved, and I am all about anyone from the Batman world. However, DC Chief Creative Officer Geoff Johns has confirmed the involvement of Nightwing (a.k.a. Dick Grayson a.k.a. The first Robin’s post-Robin persona), which makes me even happier. Shooting for Teen Titans apparently kicks off next year. Feel free to read more deets here.

So there’s a whole slew of yet more things I am geeking about. Also, not to end on a sour note, but you want to know what I’m NOT geeking about? The fact that Star Trek 3 has lost its director, Roberto Orci. This might make some people happy since Orci apparently went off on some fans on a Star Trek comment board (which I didn’t even know about until I read this Huffington Post article), but I just want to see this film get situated, you know? I love the first two films so much that I will be vastly disappointed if this one fizzles out. But we’ll see. Anyway, live long and prosper, y’all. 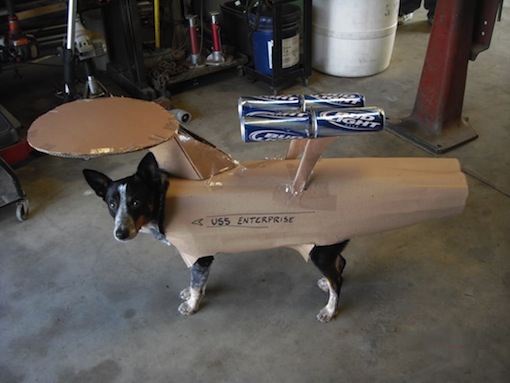 Eric, be honest–this is your dog, right?