Happy Friday, you lovely people! Most of the movies out right now kinda suck, and there’s still next to nothing on TV, so let’s spend today talking about a special kind of relationship that I quite enjoy witnessing: the bromance. I’m sure most of you are familiar with the term, but just in case you’re a little fuzzy, let’s turn to Urban Dictionary: a bromance “describes the complicated love and affection shared by two straight males.” Now that we’ve covered that, let’s talk about some of my favorite movie bromances, shall we?

Honorable Mention: Rocket and Groot (Guardians of the Galaxy)

The world was just introduced to this movie bromance a little over a month ago (see my review of Guardians of the Galaxy here), but I couldn’t resist including it. Rocket (Bradley Cooper), a gun-toting, wise-cracking raccoon, has a kind of abrasive attitude, but sweet, dim-witted talking tree, Groot (Vin Diesel), is always by his side nonetheless. Rocket is the brains, and Groot is the brawn. Together, they are an unstoppable duo. Definitely the strangest bromance on here, but also one of the most adorable. Rocket is also somehow Groot’s translator, though how he derives greater meaning from “I am Groot” is beyond me.

Every superhero needs a good, down-to-earth best bud. For Tony Stark (Robert Downey Jr.) a.k.a. Iron Man, that best bud is Colonel James “Rhodey” Rhodes (Terrence Howard/Don Cheadle). Tony can be a bit of a wild child, which undoubtedly frustrates straight-laced Rhodey, but Rhodey is always there to back him up regardless. Sometimes that involves covering for him (as he does in Iron Man), sometimes it involves breaking up a wild party (a la Iron Man 2, which I mention here), and sometimes it involves suiting up and fighting by his side. Despite occasional tension, Tony and Rhodey make their bromance work while saving the world, too.

Whaddaya know—another Robert Downey Jr. bromance! Not gonna lie, if we were discussing the TV show Sherlock, this crime-solving duo would be much higher on the list. Still, there’s no denying that the movie version of Sherlock (Downey Jr.) and John (Jude Law) have something special going for them. Sherlock is a completely ridiculous, needy, selfish person, and John constantly tells himself he should stop getting swept up his friend’s crazy adventures. But secretly, John loves those adventures. Plus, Sherlock probably couldn’t function without John. Simply put, they are perfect for each other. Too sweet.

Of all the bromances on here, Brennan (Will Ferrell) and Dale (John C. Reilly) definitely have the rockiest start. These two selfish man-children are so opposed to their parents’ marriage and their new living situation that they get into a fair share of serious squabbles. But once Dale stands up to Brennan’s bully brother, Derek (Adam Scott), their bromance is inevitable. From then on, it’s all about building bunk beds, nailing job interviews, and, of course, boats and hoes. These guys are easily the most idiotic on here, but their shared stupidity only strengthens their magical connection.

Forgive me, Trekkies—I know that William Shatner and Leonard Nimoy have a special connection, too, but I’ll only be referencing the new Kirk (Chris Pine) and Spock (Zachary Quinto), as I’ve only seen one of the original Star Trek films (The Wrath of Khan). I just said that Brennan and Dale have the rockiest start, but Kirk and Spock are a close second. These guys hate each other for a while, but once they really begin to work together, they are unstoppable. And the love! I mean, Spock beats the crap outta someone in Into Darkness because of something that happens to Kirk. Plus, they share a very bromantic moment involving a glass door. If you’ve seen the movie, you know what I’m talking about. Perfect, right?

Han (Harrison Ford) and Chewie (Peter Mayhew) are actually a lot like Rocket and Groot. I mean, a take-charge guy with a gun and a hulking humanoid that no one but aforementioned take-charge guy can understand? Sound familiar? But since we have had three movies to get to know Han and Chewie, their bromance is significantly more epic. These two would do absolutely anything for each other—even if sharp words or wookie wails are occasionally exchanged. They just…get each other. Seriously, they’re so perfect for one another that they could get married (and I’m sure there’s fan fiction out there that goes for that angle).

#5: Harry and Ron (Harry Potter films—don’t make me name them all!)

As soon as Harry (Daniel Radcliffe) and Ron (Rupert Grint) meet each other in Harry Potter and the Sorcerer’s (Philosopher’s) Stone, they are thick as thieves. And so they remain for the following seven movies. These guys are everything besties should be. They offer each other support, they never hesitate to share all of their fears and secrets, they goof off together—heck they even save each other’s lives countless times. They go through literally everything together. Seriously, if a bromance can survive teen angst, then it can survive anything. Hence why these two remain tight even as adults. 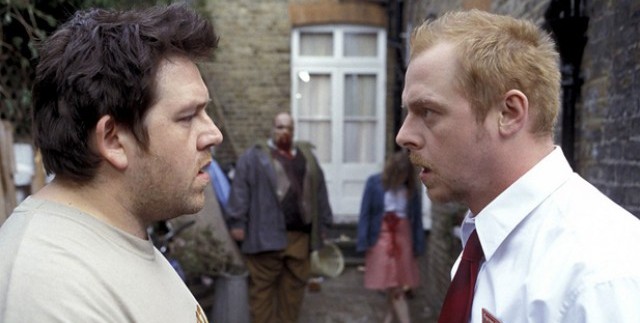 This bromance is definitely more advantageous for one bro than the other, but that doesn’t make it any less awesome. You’d think a zombie apocalypse would drive a wedge between bros, but if anything it only strengthens the bromantic feelings between Shaun (Simon Pegg) and Ed (Nick Frost). Though Ed’s extreme laziness does often grate on Shaun’s nerves, his ability to make Shaun laugh and cheer him up make up for it. That and the fact that he sticks by Shaun’s side as they battle zombies and struggle to survive. And what Ed does for Shaun at the end…bromance at its finest. Their relationship is a big part of why Shaun of the Dead (which you can read about here) is so wonderful.

#3: Inigo and Fezzik (The Princess Bride)

Inigo (Mandy Patinkin) and Fezzik (André the Giant) may not have as much time to get to know one another as some of the other bros on here, but what they do with the time they have is so bromantic that they more than earn their spot. Whether they’re amusing each other with their epic rhyme game (which I mention in this post) or storming the castle together, they are simply perfect. Fiery Inigo schemes and spurs the duo into action, and giant Fezzik is there to knock some heads and push down any doors in their way. And can we just pause a moment to appreciate when Fezzik nurses drunk Inigo back to health? Adorable.

When I went to see 21 Jump Street, I did not expect to enjoy it half as much as I did, but this joyous bromance raises the film and its sequel (which you can read about here) to glorious heights of hilarity. Schmidt (Jonah Hill) and Jenko (Channing Tatum) are another example of a bromance that starts off rocky, and there are a few more rough patches here and there, but these guys truly complete each other. Schmidt is the thoughtful, sensitive guy and Jenko is his party boy, meathead best bro. Their relationship is one of laughter, partying, and kicking ass, but it’s deeper than that. They talk stuff out. They hug. They’re willing to take bullets for each other. They’re so close that I almost wonder if they should try dating each other for a while. I mean, they do go to prom together. It wouldn’t be a stretch.

#1: Frodo and Sam (The Lord of the Rings Trilogy)

To me, this will always be the king of bromances. Frodo (Elijah Wood) and Sam (Sean Astin) have a relationship that has spurred all kinds of questions. Are they really just hobbit bros, or is there something more there? I’m inclined to think the former, but a case could be made for the latter. Because they are that close. These little guys go through hell together, but their fierce, unwavering loyalty to each other gets them all the way to the fires of Mount Doom. They constantly express their fondness for each other. They share tears and worries and their last scraps of food. Sam literally carries Frodo during the last stretch of their journey—not to mention the countless times he saves Frodo’s life. I could name dozens of perfect, bromantic moments between them. And that tearful last scene…UGH. I can’t. If there were such a thing as the Brolympics, Frodo and Sam would win every time.

Have a good weekend, kiddos! Go watch some brotastic movies! 😉