Here’s something many of you loyal readers have probably already figured out about me: I don’t do romance movies. Like, almost ever. Sure, there are a few rom-com exceptions in there, and once in a great, great while a drama with a romantic focus may pop up, but for the most part, naw, bro. Give me a good horror, comedy, sci-fi, or fantasy flick over romance any day. But John Green fever has swept the nation, and everyone under the sun has read/is reading his breakout novel, The Fault in Our Stars—a romantic drama about a couple of teens in a cancer support group. It’s received so much praise that I decided to give it a go at the theater.

While I did enjoy the film, it kind of made me feel completely heartless. Why? Because I think everyone in that damn theater was crying except me. Every time something remotely emotional happened, the sniffles were like surround sound. But me? Not a single tear. I just don’t cry during movies. However, in this case I wonder if that was at least partly due to the fact that I haven’t read the book. Surely getting inside the main character’s head prior to seeing the film would elicit a more emotional response, but is it required reading to fully appreciate the film? I don’t know if I have the answer to that, but let’s talk about the good and the bad, shall we?

Synopsis: “Hazel and Gus are two teenagers who share an acerbic wit, a disdain for the conventional, and a love that sweeps them on a journey. Their relationship is all the more miraculous given that Hazel’s other constant companion is an oxygen tank, Gus jokes about his prosthetic leg, and they met and fell in love at a cancer support group.” –Borrowed from my favorite movie site, IMDb. 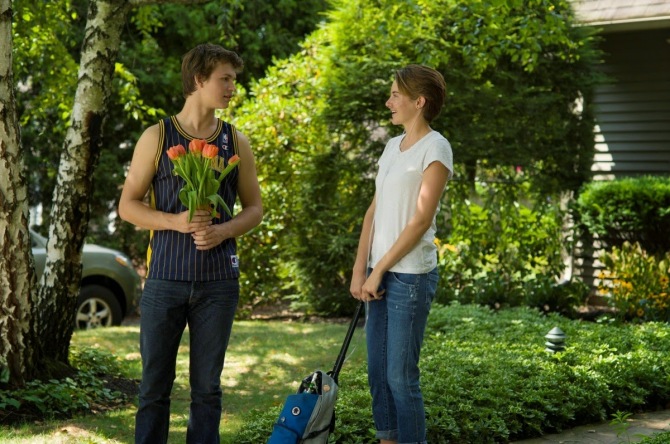 The Good: This film is definitely anchored by several strong performances. Honestly, I wasn’t initially sure how I was going to feel about Shailene Woodley as main protagonist Hazel, a 16-year-old cancer patient. But Woodley delivers. As the film went on, I found myself growing more and more attached to her, and for good reason—Hazel is funny, smart, caring, and strong-willed. She has a life and a history outside of her romantic relationship, and that’s refreshing after being subjected to teen characters like Twilight’s horrifyingly terrible Bella Swan, whose life is so nonexistent beyond her boyfriend that it’s painful. Hazel is the kind of role model teen girls need. Also, random, but Woodley is an excellent crier (you’ll see). And Hazel’s romantic interest, Gus, is played with equal finesse by newcomer Ansel Elgort, whom I recently realized won my favor as Tommy in last year’s Carrie reboot. Elgort portrays Gus with undeniable charm and warmth, pulling the audience in right along with Hazel. The two actors have great chemistry, making the relationship between their characters very believable. Also, Laura Dern (whose badassery my sister and I discuss here) is in this movie! Who knew? She, too, is fantastic as Hazel’s mother, Frannie, who is just too sweet and adorable for words. Other than the performances, I appreciated the fact that the film is dramatic without being too terribly sappy, and there’s plenty of humor sprinkled throughout, too. The dialogue is generally good, and I think the bubbles that pop up when Hazel and Gus are texting are pretty cute. From what I understand, the film stays true to the book, so if you liked the book, odds are you’ll be happy with this.

Favorite scene: Gus’s friend Isaac (Nat Wolff) has a bit of a meltdown, and a lot of things get annihilated in the process. I laughed.

The Bad: Okay, so here’s a pet peeve that I find in a lot of young adult literature: the names of the main characters are kinda silly. Seriously, who the heck names their child “Augustus” nowadays? It’s fairly pretentious—and maybe it’s meant to be, since Gus himself is somewhat pretentious, but still. “Hazel Grace” bothered me a bit, too, though to a lesser degree. But hey, that’s mostly me being ticked off at YA authors who try to make their character sooooo hip. Can’t exactly blame the film for that. It’s mostly little things that bothered me here and there in the film, like the very cliché, love-at-first-sight moment that Hazel and Gus have. And the fact the Gus is waaaay too perfect for an 18-year-old boy. I remember high school, and, I’m sorry, but those boys do not exist. That, or Gus is the only one that exists. Character wise, here’s my biggest problem: Hazel’s author idol, Van Houten. He’s played very well by Willem Dafoe, but c’mon…Van Houten is a huge cliché. I really, really wish I could delve into that without ruining an important plot point. I’ll just say this: all those stereotypes you expect from writers? Van Houten hits just about every one of them. It annoys me that John Green, a bestselling author, would make a writer character like this. But that’s the creative writing major in me raging. I guess my only other qualm is that I saw the ending coming from a mile away. And, of course, there’s still the whole question of whether or not there’s a slight disconnect if you haven’t read the book, but I’m still not sure about that. Maybe I’m just cold…

Least favorite scene: Hazel and Gus have a pretty awkward first kiss. I learned that the moment is pretty much exactly as it happens in the book, but…it just doesn’t seem real. Or appropriate, given the setting, but that’s another can of worms.

To Sum It Up: As far as teen romance goes, this is definitely one of the better options. Hazel and Gus are both strong, interesting characters, and the presence of cancer elevates the story into something more. It’s a story about grappling with mortality—and at a very young age to boot. I may not have cried during this movie, but that doesn’t mean I wasn’t impressed by the emotional journey. Highly recommended for those who have read the book. If you’re on the fence about going to see it, I say give it a shot.

61 thoughts on “The Fault in Our Stars: can John Green save teen romance?”