Confession time: initially, I had no desire to see this movie. In fact, I had made up my mind to actively avoid it. I tend to resist monster movies for some reason—partly because I find them cheesy, partly because I’ve seen so many of them fail that I’m reluctant to accept any as potentially good anymore. I had the same mindset for Pacific Rim last year. But just as Pacific Rim’s many positive reviews persuaded me to risk it at the theater, so did the initial response to Godzilla draw me to the theater on opening night. Because why not?

Just like Pacific Rim, I had fun with this movie. Of course, there are plenty of times where you just have to go with the cheesiness and accept the fact that it’s more about the monsters and the destruction than the characters and the story, but once you accept it for the pure popcorn fun that it is, it’s pretty easy to just enjoy. So Godzilla is good! Just how good, you ask? Let’s discuss.

Synopsis: “The world’s most famous monster is pitted against malevolent creatures who, bolstered by humanity’s scientific arrogance, threaten our very existence.” –Borrowed from my favorite movie site, IMDb. 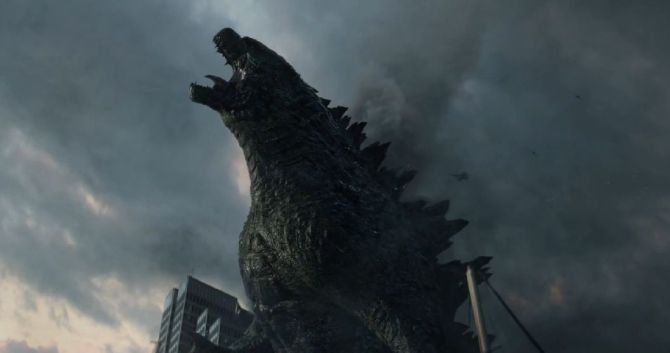 The Good: The visuals. Let’s be real: nobody goes to a movie like this for the cleverly crafted storyline (though, to be fair, the story isn’t bad)—it’s all about the big, scary monsters and the epic destruction they leave behind. On that front, Godzilla definitely delivers. A monster lays waste to a scientific facility in Tokyo. Lei-clad tourists in Honolulu watch in fear as the beach is invaded by giant terrors. Gamblers in Vegas pause as the neon lights in a casino wink out and the ground shakes. It’s all quite fun, and I feel like these are excellent, atmospheric places for the destruction to take place—not just the typical New York or California go-tos of so many monster films (although, yes, California does come into the play eventually). And the title monster himself looks really, really cool. Personally, I don’t think he’s ever looked better. The biggest Godzilla yet, he dwarfs the tallest buildings, has huge, jagged spikes protruding from his back, has a thick, indestructible hide, and roars that glorious roar we all know so well. He’s awesome. Also, so many of these shots are just gorgeous—particularly one shown in the trailer: paratroopers drop out of the sky, shoe flares trailing red smoke behind them as the sun sets in the background and Godzilla stirs ominously. Coolness overload. Aside from the impressive visuals, I will say that I like the main protagonist, Ford (Aaron Taylor-Johnson), well enough. He’s a soldier who does what he can to help, and you’re rooting for him to make it back to his wife (Elizabeth Olsen) and son (Carson Bolde). And Bryan Cranston, of course, does a good job as Ford’s father, Joe, a man obsessed with an accident that happened at the nuclear power plant he worked for 15 years ago. There are emotional moments to Joe’s story, and Cranston expresses them like a pro. The story of this family and the story behind the monstrous Godzilla mix together and make for a fun film with a little more depth than you might expect.

Favorite scene: Godzilla GLOWS IN THE DARK and proceeds to remind us why he’s king. That’s all I’m sayin’. 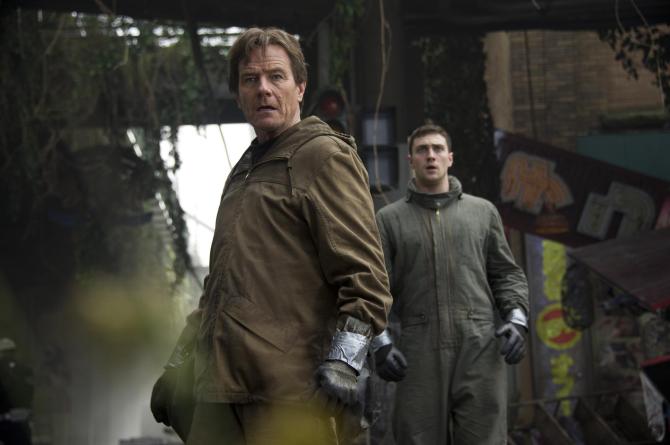 The Bad: What we see of Godzilla is great, but for a film called “Godzilla,” you’d expect to see a lot more of the monster. We actually end up seeing the other monsters more than the monster king, which is fairly disappointing. Also, for those of you who have seen the film, were you a little disappointed by the look of the M.U.T.O.s? The “Massive Unidentified Terrestrial Organisms” or “M.U.T.O.s” look a little too sleek and strange for my taste. They’re like a cross between some kind of exotic beetle and a spaceship from Star Trek, which comes off as a bit phony, I think. As for the human characters, a few of them are, sadly, quite wasted in this film. The excellent Cranston hardly gets any time to shine. His story is basically glorified exposition—performed well, mind you, but it still doesn’t seem necessary to the film. And then there’s Ken Watanabe, who plays scientist Ishiro Seriwaza. This actor’s talent is barely used, as he’s not given the opportunity to do much more than share Godzilla’s history with Ford. Even Ford, though likeable, seems a little bland for the main character of the film, and we barely spend any time with his wife, Elle, at all. Ultimately, the monsters are given more attention than the humans, which, to a certain degree, is exactly what we want, but getting the opportunity to develop more of an attachment to the human characters wouldn’t hurt.

To Sum It Up: Godzilla may not be quite the caliber film fanboys and fangirls were hoping for, but it seems to be one of the most successful films in the franchise, effectively removing the monster king from complete and utter camp. The human element of the plot could use some improvements, and I don’t love the M.U.T.O.s, but who cares? Godzilla is bigger and better than ever. If you think it sounds fun, I’d definitely say a matinee is worth your while.

P.S. Recently, Drew (a.k.a. labyrinthworm), a friend and co-worker, was inspired to start up his own movie and TV blog. Remember that list of TV crushes I did? He did one, too! Read it here, and feel free to pop in and say hello because Drew likes making new blogging frans. 🙂

32 thoughts on “Godzilla: the king of monsters is bigger and better than ever”