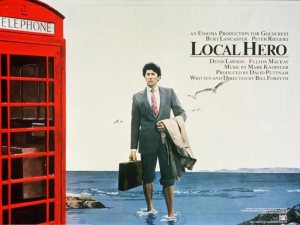 Hey guys! So WOW. A lot has been happening around this blog while I was line-dancing and singing country songs and wrangling cattle! …Nah, I’m kidding. I didn’t do any of those things in Texas. Just went to a wedding. But I scheduled two awesome guest posts for while I was away, and both were a rousing success! Thanks again, Rob and V! You can read their posts and the many other wonderful posts that have graced this series so far if you go to the Resolutions 2014 Archives.

And now it’s time for yet ANOTHER wonderful guest! Today’s brilliant blogger is Chris from Terry Malloy’s Pigeon Coop! Not only does Chris have an epic name for a blog and my very favorite rating system (he grades with pigeons, which I find adorable), but his film reviews are always intelligent, thorough, and pretty spot-on. Go give his blog a looksee if you haven’t yet. Here are Chris’s thoughts on one I’d never heard of, but really want to check out now: Local Hero!

Local Hero is a film that I’d heard a surprising number of people put in their favourite films of all time, but never one that I’d really considered watching. Part of that is down to the film’s story; it simply doesn’t sound that interesting:

An employee for an American oil company is sent to a sleepy Scottish village to purchase the location and its property to make way for the building of an oil terminal.

Doesn’t exactly sound thrilling, does it?

However, it was a pleasant surprise to find so much more to the film than it first seems. The purchasing of the village is merely a MacGuffin; the interactions between the characters is really what drives the film forward.

In fact, within about the first 10 minutes or so, you know that Local Hero has a cheeky, almost bizarre side to it. Chief of the oil company, Felix Happer (Burt Lancaster), sends our protagonist Mac (Peter Riegert) to Scotland to convince locals to sell up, but rather than give him a thorough brief of what to do, he’s far more concerned with what’s happening in Virgo. Yep, the star constellation; he wants Mac to report back anything he sees happening in the stars, seemingly for no reason whatsoever. Very odd, yet it’s these moments that give the film its charm. 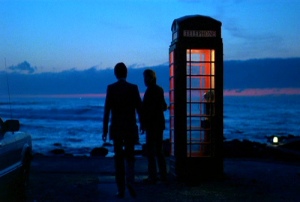 And there’s plenty more of them too. From the motorcyclist who nearly runs Mac and his business partner Oldsen (played by a young Peter Capaldi) over every day to pub owner/property manager/jack of all trades Urquhart and his wife Stella’s oddly rampant sex life, Local Hero is full of little moments that really give it some character.

The crux of the story is how Mac starts of with a very business-like attitude and doesn’t see anything wrong with turfing people out of their homes (albeit for money), but soon starts to grow fond of the village and its locals. It’s very subtly done, but that makes it all the more effective. For example, after a while Mac instinctively knows when the reckless motorcyclist is coming round the corner and holds back Oldsen before he gets knocked over. Seeing Mac come round to the village’s way of life is rather predictable but handled really well. 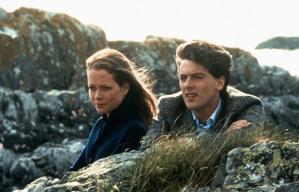 Then there’s my favourite part of the film, or rather favourite character – Marina. Played by Jenny Seagrove, Marina is a marine researcher at a local lab and is rather easy on the eye. However, that’s not the reason she’s probably my favourite thing about Local Hero; no, it’s how much of an enigma she is and that she might actually be a mermaid. Yep, a mermaid.

There are loads of clues throughout the film that Marina is a mermaid, her name being just one of them. Add to that how comfortable she seems in the water, how she beguiles men when she meets them and certain parts of her body with somewhat aquatic features and all the signs are there. I don’t for one second think that director Bill Forsyth has actually written Marina as a genuine mermaid, but I just love that all those little suggestions are in there.

Now there are a few issues with the film, the most notable being the ending. It just feels very rushed, as if they didn’t really know how to wrap it up. Maybe it’s just because I wanted to spend more time with the characters, but everything just seemed to get resolved very quickly and with a rather predictable outcome. It leaves a slightly sour taste in the mouth but how we get to this point is the real heart of the film.

Absolutely! Whilst I wouldn’t quite say so myself, I can see why some state Local Hero is one of their favourite films. It’s definitely a film I would watch again, as I reckon there’s plenty I’ve forgotten or missed the first time around. Oh and it also has a rather killer piece of music from Dire Straits as a refrain throughout, which gets stuck in your head for hours afterwards. It’s taken me a whole to get round to this but I’m so glad I made the effort.

Chris, thank you SO VERY MUCH for an excellent review! This is yet another film that I feel like I must watch now! Love that this series has brought so many great films to my attention. Speaking of this series…I’ve had a bit of a surge of last minute reviews/people saying they want to send something, so here’s what I was thinking: how about we extend this series into February? Not the whole month–just the first week, perhaps. I had intended to end Resolutions 2014 in January, but I don’t want to leave anyone out by cutting it off early. Here’s what I’m asking: if you’re DEFINITELY planning to send a review, comment below or shoot me an email at cs227@evansville.edu just so I can know how many I should expect. Then, try to send it to me no later than Wednesday of next week (though sooner would be even better! :D). Deal?

P.S. Just for the record, “too many participants in my blog series” is probably the best problem I’ve ever had. You guys are awesome! 🙂