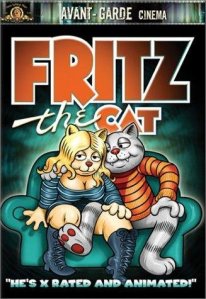 Surprised to see this on my blog? Well…that makes two of us. Haha. When Thomas from Video As Life came to me with this film resolution, I hadn’t even heard of it. Thomas explained to me that it’s an X-rated cartoon, which threw me for a bit of a loop. Nonetheless, I trusted Thomas, whose thoughtful film blog covers, in his own words, everything “from Citizen Kane to Curious George, from Mulholland Dr. to My Little Pony: Equestria Girls.” Lots of great, diverse content on there, folks, so definitely go check it out if you haven’t already. Anyway, Thomas took the time to examine this film not just as a naughty cartoon, but as an interesting satirical piece. Here’s what Thomas has to say about Fritz the Cat!

“Just because there are talking animals and it’s animated doesn’t always mean it’s a kids film (Fritz the Cat anyone?).” Rango review, August 6, 2013.

That’s the truth; had I known this film would be much easier to find than what I had originally thought, I would have watched it much earlier. I found and purchased a DVD copy at a secondhand store where it’s nothing but donations. I’m surprised that someone around town had a copy in the first place but as someone who wants the best for cheap without pirating, this was probably my only current chance to do so. In the back of my mind, I had heard of this film mainly for the fact that it was the first X-rated animated film in history. The back cover of my print lists it as “Not Rated” though the suggested viewing age is listed for other countries. Figured I had nothing to lose, I sat down and watched it.

A college-aged cat kicks around the 1960’s and gets into all sorts of hi-jinks.

Trying as best as I can to keep it G according to my profile on the LAMB website, what kind of adventures does Fritz get into? Sex and drugs overlaid with a soundtrack of rock and roll, staging a revolution, escaping the law, and blowing up a power plant.

The thing to keep in mind is that this is satire from the dialogue down to the animal symbolism. Two of the animals included are pigs (the police) and crows (African Americans). If anyone felt uncomfortable with the depiction of the crows from Dumbo, then this film will be a hard one to swallow. I even felt unsettled when the scenes were played. That’s not to say they were well done in the context of satire. The only animal I had difficulty understanding are the panthers/lions/whatever that are supposed to represent the Jewish. I am not sure what the symbolism is but if anyone has an answer let me know.

According to the DVD print I have, the top banner labels it as “Avant Garde Cinema”. That’s true in the sense that this film will catch you off-guard in terms of content and animation. There are some rather trippy scenes, namely when a crow Fritz befriends dies on the street and his life ticks away by pool balls and the entire introduction to Blue, the bunny on the motorcycle. Then of course there’s the idea of an X-rated animated film, something that was considered avant-garde back then.

How does it hold up today? If you watch it solely on the fact that it was the first X-rated animated film then I suppose it does well. Granted, we’re in the age where some of the humor in the film is not only politically incorrect and offensive as it was when it was first released but also that it’s been done later on in some animated shows (I’ll let you fill in the blanks). That said, the bite it has may not be as strong.

I’d recommend it for historical purposes. It’s one to keep away from the kids for sure.

Thanks, Thomas, for being yet another excellent guest blogger this week! I’ve hit the jackpot with guest reviews lately! However, my inbox is officially empty as far as new write-ups go, so I guess I need to get back to writing my own…Unless one of you lovely readers want to send something my way! 😉 Send your film resolutions to cs227@evansville.edu any time. In the meantime, I will try to put up something of my own tomorrow or Saturday…most likely Saturday. We’ll see if motivation kicks in. Lol.