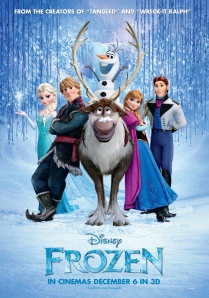 Hello, friends! After a brief holiday hiatus, I’m back! However, I think I might be the very last person on Earth to review this film. Or at least the last person on WordPress. I don’t know how many of you have been paying attention to the saga of me trying to see this movie, but it’s been quite a journey. First, I was prevented from seeing it due to nearly eight inches of snow and ice (the irony of the situation was not lost on me). Then, I was stalled again when my movie buddy had a family emergency (don’t worry—everything’s okay now). But as the saying goes, the third time’s the charm. My sister, my mother, and I had ourselves a merry little Christmas Eve when we caught a matinee showing of this animated film, which the three of us had been looking forward to for some time.

So now for the big question: is Frozen good? For all its money and power and creativity, I feel like Disney has been struggling the last several years to recreate the magic of what many individuals refer to as “the golden era,” or the period during which the company released The Little Mermaid, Beauty and the Beast, Aladdin, The Lion King, and a slew of other hit films. Some people may say that Pixar has filled that void, and the Pixar films have indeed been phenomenal, but they’re also entirely separate entities from the classic, musical Disney tales that many of us remember so fondly. While I can’t confirm that Frozen is a return to the golden era, I can say that it’s a very enjoyable and beautifully animated film complete with a spunky princess, a few lovely musical numbers, and plenty of magic. 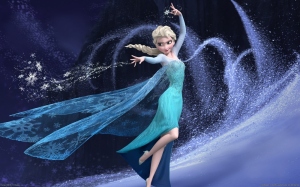 Synopsis: “Fearless optimist Anna teams up with Kristoff in an epic journey, encountering Everest-like conditions and a hilarious snowman named Olaf in a race to find Anna’s sister Elsa, whose icy powers have trapped the kingdom in eternal winter.” –Borrowed from my favorite movie site, IMDb.

The Good: The animation is nothing short of gorgeous. The close-ups of beautifully intricate snowflakes at the beginning, the sweeping shots of the snow-covered lands, the stunning ice castle created by “snow queen” Elsa (Idina Menzel)—it’s all very impressive. I saw this film in 2D, but I could definitely see the advantages of a 3D experience. But as far as the musical experience goes, there are a few standouts for me: 1) “Frozen Heart,” the song several manly men sing in the opening scene as they chop up ice. It’s very cool, and it kind of took me back to “I’ll Make a Man Out of You” in Mulan…which is now stuck in my head. Argh. 2) “Do You Want to Build a Snowman?” It’s a song in which Anna (Kristen Bell) tries multiple times to get older sis Elsa to come out of her room and play. It’s so sweet, yet so sad, and by the end of it you might get a little sniffly. For yet another Disney reference, it vaguely reminded me of the bittersweet love story in Up—adorable and heartbreaking. 3) “Let It Go,” which is undoubtedly the showstopper. Elsa unleashes her powers and enjoys a moment of freedom, and Menzel puts those pipes to work. Think Wicked’s “Defying Gravity,” but Disneyfied. As far as the voice actors go, Bell is perfect as sassy, determined, quirky leading lady Anna, Menzel does a good job as reserved, distant older sister Elsa, Jonathan Groff pulls off slightly grumpy and antisocial mountain man Kristoff very well, and Santino Fontana oozes the charm we all expect from a Disney prince like Hans. Yet despite the presence of a prince, princesses, magic, and, of course, true love, the ending proves Frozen is slightly different from your typical Disney tale, and that is not at all a bad thing. Favorite scene: When Elsa sings “Let It Go.” Incredible visuals + awesome song + empowering character moment = the best part of the movie.

The Bad: Though a few of the songs are great, several of them are very generic. There are many standout songs from Disney’s golden era, and almost all of them are big, unique musical numbers that translate quite well to Broadway. But at least half of the songs from Frozen are forgettable pop tunes that don’t strive for any kind of originality. And the lyrics are sometimes so forced that it’s painful. Also, tell me if it’s okay to be bothered by this: Anna is shut away in castle for most of her life—a social person forced to be antisocial. Her first reaction to the idea of meeting new people? To get all in a tizzy over the possibility of meeting “the one.” Maybe this is me being too much of an independent single lady, but is it a little annoying that Disney creates a strong female character only to make her first thought “I want a boyfriend”? Can’t Anna just make friends and happen upon “the one” rather than actively seeking him out? Just a thought. Other than that, I hate to say it, but…I didn’t like Olaf the snowman. I read a lot of reviews that praise him, and Josh Gad does voice him quite well, but I just didn’t find him funny. He’s definitely geared toward a younger audience, and sometimes I can get onboard with kiddie humor, but Olaf didn’t work for me. Least favorite scene: The “I might get a boyfriend” reaction I mentioned earlier? It’s expressed in a song called “For the First Time in Forever.” I don’t love the title, but the worst part of it is when Anna sings, “Don’t know if I’m elated or gassy / But I’m somewhere in that zone / Cause for the first time in forever / I won’t be alone.” Seriously? “Elated or gassy”? That’s the best the musical masterminds of Disney can muster?

To Sum It Up: Though I wouldn’t call it a Disney classic, Frozen is quite a lot of fun. The animation is amazing, the characters are likeable, there are a few great songs, and the story, though often predictable, has a satisfying conclusion that is slightly different than a typical princess tale. It’s an excellent film for families and Disney fans.

P.S. If you are planning to review a film for Resolutions, you may send it my way (cs227@evansville.edu) any time. I look forward to seeing what everybody decides to do!

23 thoughts on “Frozen: a Disney delight”