Have you been itching to find out my top five ghost films? Fret no more! I’m back with the best of the rest! And if you missed yesterday’s Part One, just click here to catch up. Now it’s time to get downright spooky…

Synopsis: “A man who specializes in debunking paranormal occurrences checks into the fabled room 1408 in the Dolphin Hotel. Soon after settling in, he confronts genuine terror.” –www.imdb.com

Why It’s Ghoulishly Great: 1408 is an interesting ghost flick because so much of it is psychological. Between the protagonist’s troubled history, steady drinking, and ever increasing paranoia, there’s always the chance that the terrors could be in his head—and maybe a great deal of it actually is. But that doesn’t make this film any less scary, and it definitely doesn’t mean the room is ghost-free. Mike Enslin (John Cusack) has a unique career: he makes his living hopping around to different places that are allegedly haunted and writing about his experience, spending at least one night at each place to see if anything paranormal pops up. But nothing ever does. So he’s a firm non-believer. Then, he gets a mysterious card from an old hotel in New York explicitly telling him not to stay in room 1408. So what does he do? He goes to the hotel and books the room. The hotel manager (Samuel L. Jackson) tries to talk him out of it, eloquently warning that it’s “an evil f***ing room” where a whopping 56 deaths have occurred since the hotel opened, but Mike is determined to stay the night. He enters the room, and it doesn’t take much time for things to get weird. The radio turns itself on and blares an eerie song, things suddenly appear or rearrange themselves, apparitions jump out of windows or try to attack him—and these are all just opening acts. The real fun begins when the room uses Mike’s past against him, showing him his best and worst memories and slowly, painstakingly nudging him closer to insanity. With a clever mix of supernatural and psychological tricks as well as a truly eerie ending, 1408 very well could keep you from ever checking into a hotel again…

Synopsis: “Ichabod Crane is sent to Sleepy Hollow to investigate the decapitations of three people with the culprit being the legendary apparition, the Headless Horseman.” –www.imdb.com

Why It’s Ghoulishly Great: There are few ghouls cooler than the Headless Horseman. You’ve got to give credit to Washington Irving—without his original short story, “The Legend of Sleepy Hollow,” this film (and the increasingly addictive Fox TV series) wouldn’t exist. The eerie short story has always been one of my favorite tales, and I think this film does a nice job of capturing its spooky mood while also expanding the story into an adventurous mystery. Rather than just some unfortunate schmuck who encounters the Horseman while riding home one night, the film promotes Ichabod Crane (Johnny Depp) to a police constable in New York City. Ichabod is sent to the town of Sleepy Hollow to investigate a string of brutal murders in which the victims were, of course, beheaded. Though he at first refuses to acknowledge any supernatural involvement, Ichabod eventually sees for himself that the Horseman is real. As the body count rises and the mystery thickens, Ichabod must face his fear and get to the bottom of Sleepy Hollow’s murders before the townspeople quite literally lose their heads. Like any Tim Burton film worth its salt, Sleepy Hollow has a wonderfully creepy atmosphere with many shots so hauntingly lovely that they could be paintings. Sometimes, the film’s pacing seems a bit rushed (I almost wish the film had been two hours instead of slightly more than an hour-and-a-half), but an interesting story develops nonetheless. The best thing about this film is probably Johnny Depp. Always a pro with quirky characters, Depp instills poor, terrified Ichabod with humor, charm, and a kind of desperate bravery that you can’t help admiring. The fun story, admirable hero, and grim atmosphere make Sleepy Hollow an excellent Halloween film. 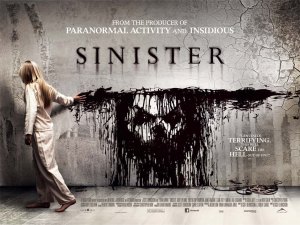 Synopsis: “A true-crime writer finds a cache of 8mm home movies that suggest the murder he is currently researching is the work of a serial killer whose career dates back to the 1960s.” –www.imdb.com

Why It’s Ghoulishly Great: Sinister may have received somewhat mixed reviews from the critics, but I think this one was quite possibly the best horror film of last year. Bumps in the night, disturbing videos, creepy kids, a crazy scary ghoul—this film has it all. It’s terrifying, y’all. What goes down is this: true-crime writer Ellison (Ethan Hawke) moves his family into a home where a brutal quadruple murder took place. Ellison hopes to find a spark of inspiration in the house to get him going on his next big bestseller, but he finds more than he bargained for when he discovers film footage of a series of brutal murders. His research takes him to darker and darker places, and though he suspects the work of a serial killer, there appears to be something much more menacing at work. What really sticks out about this film is the use of the footage. Ellison watches five horrifying home videos, each one more unsettling than the last. Seriously, just thinking about the “Lawn Work” video gives me chills. Footage is used very effectively at the end as well, piecing together a finale that is so wrong and strange yet also gruesomely perfect. Every time I reach the end of Sinister, I’m on edge for the last five minutes straight. It’s that good. I also appreciate the fact that though there’s a lot of implied violence, it’s not shown in great detail. For me, the less gore the better. The true-crime aspect and the video footage may make you think this film is more mystery or thriller than horror, but when it gets down to the nitty gritty, this is a ghost story through and through. And a good one at that. 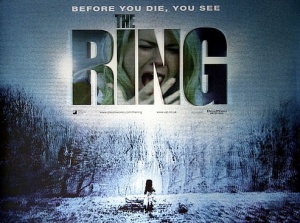 Synopsis: “A young journalist must investigate a mysterious videotape which seems to cause the death of anyone in a week of viewing it.” –www.imdb.com

Why It’s Ghoulishly Great: Maybe it’s a bold assertion, but I truly believe The Ring is a modern horror classic. An American remake of Japanese horror film Ringu, The Ring is a compelling mystery, a heart-pounding thriller, and a pretty darn freaky ghost story. Many people may disagree, but I think The Ring is also one of those rare cases in which the remake actually builds upon and surpasses the achievements of the original film. That said, however, all credit for the film’s unique premise must go to the original creators because the plot is pretty much taken directly from Ringu. Heck, there are even several moments that are faithful to the original shot by shot. But then, why should such an interesting story be altered? The trouble all begins with a videotape that allegedly kills viewers seven days after they watch it. When her niece becomes entangled in the tape’s mystery, journalist Rachel (Naomi Watts) begins investigating its origins. But after watching the tape herself and observing the strange side effects it has on her life, Rachel begins to believe that there’s a dark, supernatural force at play. And boy, is she right. There are so many wonderfully disturbing things in this film. An eerie, black-and-white series of bizarre images, the tape itself is pretty upsetting, but there are so many other touches that give The Ring its creepy edge—touches that I don’t want to ruin for anyone who hasn’t seen the film yet. However, I will say that the terrifying child that all this horror is traced back to (because let’s be real—it’s always a creepy kid, isn’t it?) provides a great story and a dynamite ending. The Ring is a thoroughly enjoyable spook fest, and I highly recommend it.

Synopsis: “A boy who communicates with spirits that don’t know they’re dead seeks the help of a disheartened child psychologist.” –www.imdb.com

Why It’s Ghoulishly Great: M. Night Shyamalan’s first and best hit (or his only hit, depending on who you talk to), The Sixth Sense is a thrilling, dramatic ghost story with excellent pacing, a five-star script, and phenomenal performances from the main cast. And, of course, one of the best twist endings of all time. Splitting its time between child psychologist Dr. Malcolm Crowe (Bruce Willis) and troubled child Cole (Haley Joel Osment), The Sixth Sense brings the two characters together when Dr. Crowe takes on Cole as a patient. Slowly, they form a bond, each sharing his own deep, dark secrets. Dr. Crowe admits to Cole that nothing has been the same with his wife ever since a severely disturbed patient broke into their home, and Cole admits his darkest secret with the most famous line of the film: “I see dead people.” Poor Cole is constantly haunted by the spirits of the dearly departed, and they scare the living daylights out of him. Osment is brilliant as Cole. He’s so very good at expressing his character’s fear and pain that you just want to reach through the screen and give the poor kid a hug. And Willis’s performance as Dr. Crowe certainly isn’t to be ignored. It’s nice to see him outside of his standard tough guy go-to and in a more vulnerable role. As a drama, mystery, thriller, and horror all rolled into one, The Sixth Sense is a multi-genre masterpiece with quite an emotional punch—lots of effective spooks encompassed by a great story. It’s definitely worth your time.

So there they are—my top five Ghostly and Ghoulish Greats! Hope you enjoyed! Wondering what’s on deck for Spook Series 2013? Wonder no more! Coming soon: 11 Sinister Side Splitters (aka horror-comedies). Part One of that list will be up in no time! As always, I’m going to provide the full list for this category below. What do you think—love ‘em? Hate ‘em? I eagerly await your opinions 🙂

Women's Bible study journey making our way through the Bible, one woman at a time