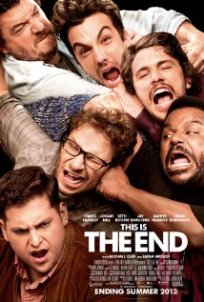 Even after surviving Y2K, the end of the Mayan calendar, and countless wild end-of-the-world theories, we’re all still fixated on the idea of the apocalypse. But who can blame us? It’s much more fun to imagine our world ending with a bang instead of a whimper, and Hollywood has supplied us with plenty of grand ideas for what’s going to finally do us in. Plagues, zombies, aliens, global warming, volcanoes, asteroids—the list goes on.

This Is the End directors Seth Rogen and Evan Goldberg, however, approach the world’s final days in a way that pokes fun not only at disaster movies, but at Hollywood itself. Here we have not characters, but the actors themselves—or more specifically, actors playing themselves—holed up in a Hollywood mansion and grappling with a sudden, violent apocalypse. Originally, I had reservations about this film. After seeing it, I can honestly say that it is one of the most inappropriate, immature, gross, and downright hilarious comedies I’ve seen in a long time.

Synopsis: “While attending a party at James Franco’s house, Seth Rogen, Jay Baruchel and many other celebrities are faced with the apocalypse.” –Borrowed from my favorite movie site, IMDb.

The Good: So very much. Having the actors play “themselves” was a brilliant choice; it brings a degree of self-awareness to the film that is both interesting and really entertaining. The actors are, of course, exaggerated versions of themselves (or, in Michael Cera’s case, hopefully an entirely different version), and how they interact with each other is hilarious. They also toss in video confessionals here and there, giving it a humorous sort of “Real World: Apocalypse” vibe. And though I’m normally not a Danny McBride fan, I must admit that he absolutely steals the show. His first scene in particular is awesome, and a wildly inappropriate argument between him and James Franco sticks out as quite possibly the funniest part of the film. Throw in an axe-wielding Emma Watson and a very surprising cameo from Channing Tatum, and the film is comedy gold. Favorite scene: The very end. Say the last 2-3 minutes. That’s all I can say without ruining it. For lack of a better word, it’s magical.

The Bad: Though I think this film is very, very funny, it’s definitely not for everyone. If you’re uncomfortable with lots of bad language, drug usage, and sexual references, this may not be the comedy for you. Rogen and Goldburg have a tendency to rely on gross/immature humor—maybe a little bit too much sometimes. For example, James Franco has a giant sculpture of…well, of a certain piece of anatomy in his house. The sculpture is prominently displayed throughout the film. It doesn’t play a significant part in the plot or anything. It’s just…there. There are lots of things like this in the film that might make you pause and think, “C’mon, guys. Really?” Least favorite scene: Probably when one of the actors (I won’t ruin it by naming names) is possessed by a demon. The possession as a whole is funny, but the initial possession scene is crude and disturbing. It seems much darker than the rest of the film.

To Sum It Up: Basically, if you enjoy comedies like The Hangover and Superbad, you will probably enjoy This Is the End. It has lots of fun cameos, hilarious situations, and fantastic bromances. There’s even a little lesson about redemption thrown in for those (few) moviegoers seeking a moral to the story. Its often childish humor may be too much for certain viewers to appreciate, but overall I think This Is the End is a wildly amusing examination of the apocalypse from a fresh perspective. Forget the whimper and the bang—this disaster movie ends with plenty of laughter.

17 thoughts on “This Is the End: the lighter side of the apocalypse”